This post originally appeared on my Peevish Pen blog on February 24, 2008.
The oldest Nace daughter: my Great-aunt Lucy 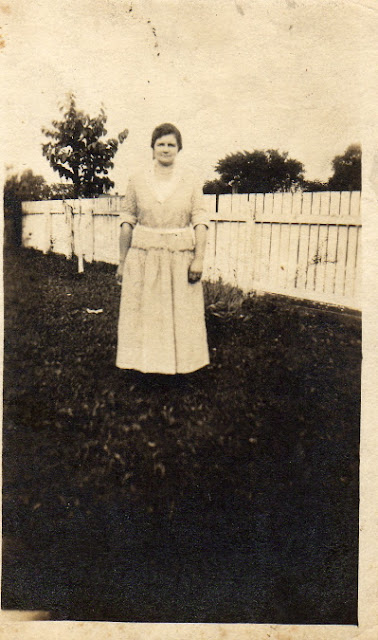 Mary Lucy Nace Mays
My grandmother’s oldest sister, Mary Lucy Nace (b.1885) was no doubt named for her grandmother, Lucy Goff (who married Andrew F. Spence of Bedford on December 19, 1849. The Mary part might have come from her great-grandmother, Polly (Mary?) Harrison.
I knew her as Aunt Lucy (pronounced “Aint Lucy”), but I never saw her very often. When I was little, she’d sometimes come to visit my grandmother—her sister Blanche. I remember that, unlike my shy grandmother, Lucy was outgoing. She and her husband Charles Franklin Mays lived in Richmond where they raised their family. The last time I saw Aunt Lucy was at my college graduation in June 1967. She wasn’t able to stay and socialize afterwards; she had a grandson’s high school graduation to attend that evening.

Like her grandmother and namesake, Lucy Nace married in December. Here’s the clipping that Lisa, my second cousin (once removed) and Lucy's great-granddaughter, sent: 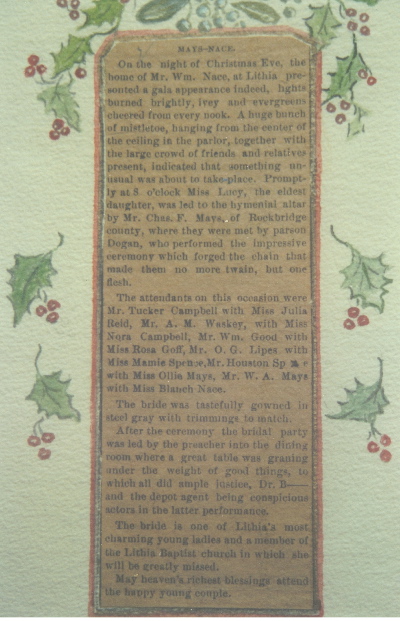 Thanks to Lisa Kuper for jpeg.

This is what it says:

MAYS-NACE
On the night of Christmas Eve, the home of Mr. Wm. Nace, at Lithia, presented a gala appearance indeed, lights burned brightly, ivy and evergreens cheered from every nook. A huge bunch of mistletoe, hanging from the center of the ceiling in the parlor, together with the large crowd of friends and relatives present, indicated that something unusual was about to take place. Promptly at 8 o’clock, Miss Lucy, the eldest daughter, was led to the [hymeneal] altar by Mr. Chas. F. Mays, of Rockbridge County, where they were met by Parson Dogan, who performed the impressive ceremony which forged the chain that made them no more twain, but one flesh.

The bride was tastefully gowned in steel gray with trimmings to match. After the ceremony the bridal party was led by the preacher into the dining room where a great table was groaning under the weight of good things, to which all did ample justice, Dr. B----- and the depot agent being conspicuous actors in the latter performance.

The bride is one of Lithia’s most charming young ladies and a member of the Lithia Baptist church in which she will be greatly missed.

Apparently it did. They had several children and lived a long life. Here, to preserve a bit of the Nace family history, are some pictures of Lucy Nace Mays, her husband, and her children.

I'm not sure how old Charlie and Lucy were in this picture, but they look fairly young:

I think this must an earlier pictures. Lucy is three months pregnant with Hazel. I'm guessing the picture was taken in the spring at her parents' house in Lithia: 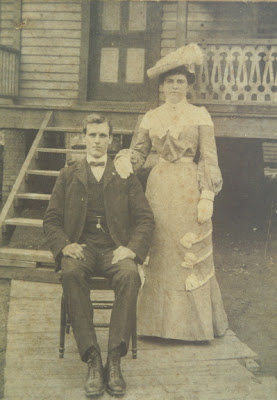 Thanks to Lisa Kuper for the photo.
(Hazel was Lisa's grandmother) 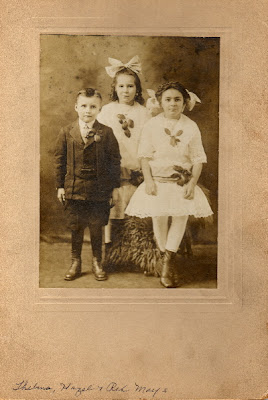 I have several pictures identified only as "Lucy's baby." This one, however, is identified as baby Elwood: 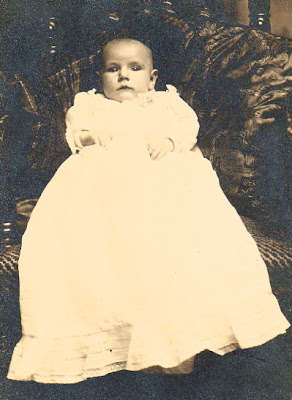 This picture of one of the daughters (Hazel? Thema?) is charming; she looks ready to garden: 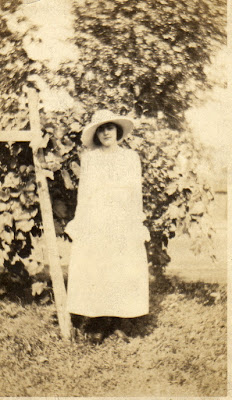 In this picture, Thelma looks so sad, but she is lovely. The baby is identified on the back of the picture as "Jean." 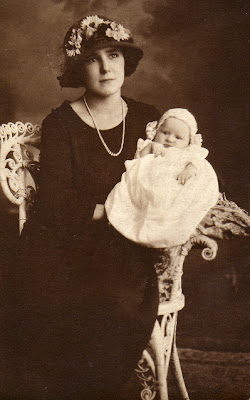 This picture of Charlie and Lucy was taken when they were older. From the car in the background, maybe the 1930s or early 1940s?

This is how I remember Uncle Charlie and Aunt Lucy. I think this picture was taken in the late 1950s or early 1960s, but she still looked exactly like this in 1967: 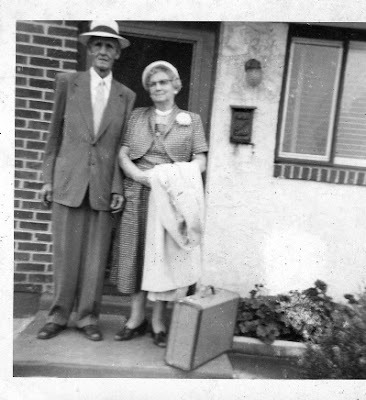 All the daughters of William and Frances Nace of Lithia are now gone. Only memory remains.

I've lost Lisa's contact information. Her email address vanished with a computer crash two years ago. If she finds this post, perhaps she can contact me again.
Posted by Becky Mushko at 1:57 PM