Sometime in 1927, this article about John C. Nace and his descendants appeared in the paper. I don't know if it was the Roanoke paper or the Fincastle paper, but—from the way the women are dressed—it must have been during fairly warm weather. 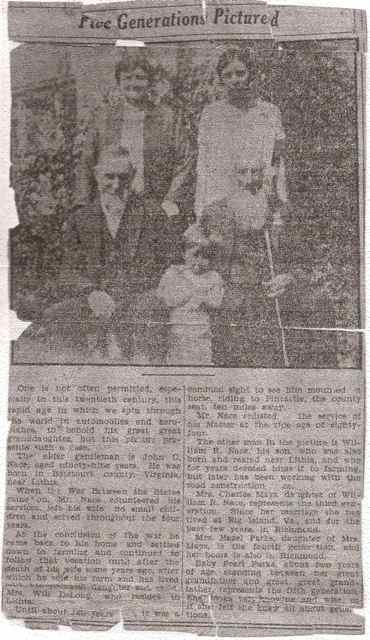 This is what the article says:

One is not often permitted, especially in this twentieth century, this rapid age in which we spin through the world in automobiles and aeroplanes, to behold his great great granddaughter, but this picture presents such a case.

The elder gentleman is John C. Nace, aged ninety-nine years. He was born in Botetourt County, Virginia, near Lithia.

When the War Between the States came on, Mr. Nace volunteered his service, left his wife and small children and served throughout the four years.

At the conclusion of the war he came back to his home and settled down to farming and continued to follow that vocation until after the death of his wife some years ago, after which he sold his farm and has lived with his youngest daughter and child, Mrs. Will Delong, who resides in Lithia.

Until about two years ago, it was a common sight to see him mounted on horse and riding to Fincastle, the county seat, ten miles away.

Mr. Nace enlisted in the service of his Master at the ripe age of eighty-four.

The other man in the picture is William R. Nace, his son who was also born and reared near Lithia, and who for years devoted himself to farming but later has been working with road construction since.

Mrs. Charles Mays, daughter of William R. Nace, represents the third generation. Since her marriage, she has lived at Big Island, Va., and for the past few years, in Richmond.

Mrs. Hazel Parks, daughter of Mrs. Mays, is the fourth generation and her home is also in Richmond.

Here's a closer look at the picture: 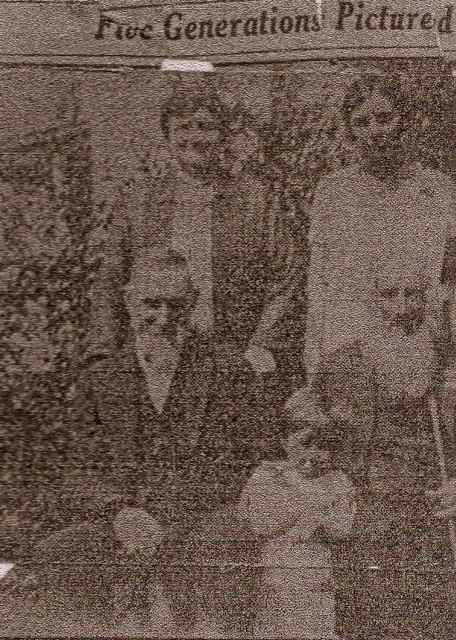