Like his brother Matthew, Robert Nace was also missing from the settlement of his father's estate. Where could he have been?

On a hunch, because William Nace Jr. and Matthew were in Lecompton, Kansas, I did a bit of Googling. I didn't find much—no evidence of a marriage, no death date, etc.—but I did confirm that he was indeed in Lecompton. I found this picture of the Rowena Hotel posted on the Historic Lecompton website:

So, Robert was the respected proprietor of a saloon. I Googled for more information and found that the Lecompton Historical Society's Bald Eagle, Vol. 12, No. 3, Fall issue had an article titled "Hotels of Lecompton 1855-1861." In the article was indeed a mention of Robert Nace: 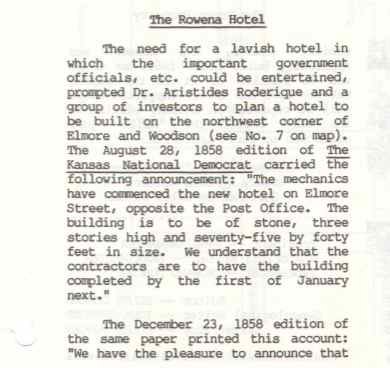 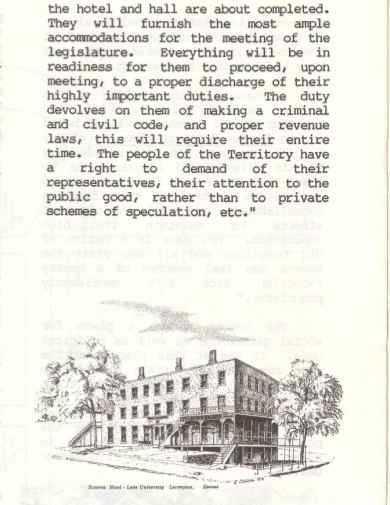 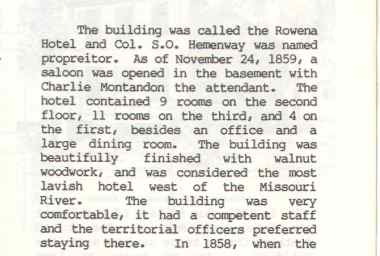 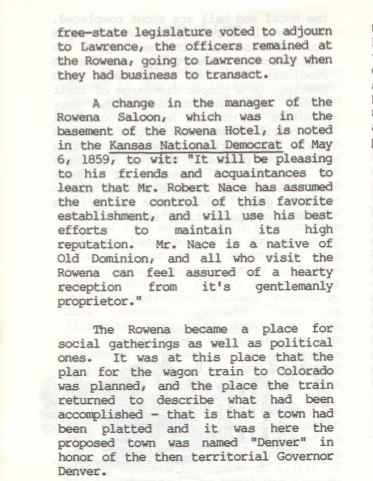 "Mr. Nace is a native of Old Dominion" identifies his home state—Virginia. Had to be the right Robert!
Another issue of the Bald Eagle (Vol. 20, No. 4, Winter) had another story about the Rowena on pages 2 and 3—and another mention of Robert Nace.
The LHS Newsletter Archive
Volume Twenty, Issue Number 4
Originally Published in Lecompton, Kansas : Winter 1994
Digitally Archived August 2006
THE ROWENA HOTEL

Kansas had been opened as a territory in Au-

gust, 1854. The center of the government organized

at Fort Leavenworth at the United States Army Base.

After a year of seeking an appropriate place for a

capital, Lecompton, K.T. was chosen. There were

few dwellings there, so investors hurried to the town

to build hotels and houses. The territorial government

would soon meet there in addition to the U.S. govern-

ment offices, so good accommodations were a neces-

The need for a lavish hotel in which the govern-

ment officials could be quartered was of great impor-

tance because many of them would be from the east

and accustomed to a more elaborate standard of

living than was available on the newly organized

group to invest in such an undertaking. The group

selected a plan for alarge stone hotel. As there were

no stone masons in the area, Roderigue went to St.

Louis, Mo. to find some. There he engaged Mark

Migliario to go to Lecompton to build the hotel, and

his brother Constantine soon joined him, as he too

was a skilled stone mason. They were both Italian

their home on a farm west and south of town, and later

built a large stone house where they lived the rest of

their lives, and it is still inhabited.

The hotel building was started in 1857 and com-

the second floor, lIon the third, 5 on the first,

besides an office and a large dining room. There was

also aseries of work rooms down in the lower level.

It was to be heated with stoves, lighted with lamps or

candles, and have outdoor plumbing. There were to

be seven cisterns in the basement which would be

pumped into a large tank on a scaffold on the west

side as the water source.

The exterior of the hotel had 4 entrances on the

east, south, and west. The south entrance had a large

flat rock inlaid in the ground that served as a porch

that led to the beautiful double entrance glass doors

and across to the west side. Also carefully cut small

stones were inlaid in the area that framed the doors.

The east side of the building had along" strip" stair-

case that led from the street directly up to the door

which also had alarge glass section in it.

Three huge chimneys rose above the roof and

accommodated all the stoves in the building, even the

kitchen stove. There was a steep staircase on the

west side of the building, that provided access to the

second floor and care for the water tank. There was

also an entrance on the west that opened to the

kitchen area and was a place to receive groceries and

Montandon was in charge of the saloon then in one of

the lower rooms in the basement, as was a barber and

in the hotel, and stages left daily for all parts of the

Territory, and it also made connection with Missouri

River Steamers and the Hannibul and St. Joseph

When the Rowena Hotel opened for business, it

was considered the most lavish hotel west of the

Missouri River. It was very comfortable and had a

guests registered at the hotel and the next day only

25. This was at the time the legislature was to meet,

and they were adjourning the meetings to Lawrence,

wanting to avoid Lecompton and her reputation for

The Rowena had been financed by a group of

Leamer and Robert Stevens had participated in that

investment. In 1858when the Free State Legislature

voted to move to Lawrence, the federal officers

voted to remain at the Rowena, going to Lawrence

only when they had business to transact. The Rowena

had been doing well until then, but after that it started

losing money and needed the investors to come forth

but none of the others did. After the hotel failed

the other participants helped.

In addition to that the chef had ordered groceries costing over $500.00

which he also paid.

Entertainment became an important part of the

activities at the hotel. A large saloon was under the

supervision of Robert Nace a former native of the

"old dominion," so he was amply able to conduct the

saloon in a quality way. Hemingway had recently

erected in the Rowena Hall two of Brunswick & Co.'s

The dining room was aplace for entertainment

and conversation. In 1858 when James Denver was

appointed Territorial Governor, and the territorial

legislature was in session, the place was full to over-

flowing. A guest entered, very excited over news he

had just been told, that gold had been discovered in

neighboring Colorado. During the discussion, a group,

decided to organize a small wagon train and send

them to Colorado to a place in the Rocky Mountains,

where they would stake out claims for their backers

and also to plat a town there, as that was still a part

of Kansas Territory. A caravan was put together and

left from the Hotel. It traveled west for several weeks,

finally arriving at the site ofthe gold discovery. Upon

investigation it was found that all desirable claims had

been taken. However, the group staked out a town

and platted it before leaving. The government needed

that done, as so many people were going there to

settle and some organization was essential. They then

left for Lecompton. On their last day of the trip they

conceived the idea of killing all varieties of wild game

they could get, clean and skin it, then upon their

arrival at the hotel, give it to the chef to prepare a big

dinner for that night and invited all their promoters to

a wild game feast, perhaps to try to compensate for

the lack of gold claims. This was done, and at the

feast that evening, they were discussing what to name

the new town, and couldn't agree. Just then Gov.

yelled, "Call it Denver. "It was met with loud cheers,

and it was so named. That is how the big city of

Denver, Colorado was platted and named. So the

results of the trip were a city well planned, a wonder-

In January, 1859, the hotel keepers made prepa-

rations for the multitude of people who would come

to the territorial land sale. They came from all over the

east, south and west to buy land for farms or for

homes, so the hotels were always over crowded.

But what eventually happened to Robert? Did he go to Denver with the multitude? The Denver Public Library posted a list of the "Fifty-niner's Directory, Colorado Argonauts, 1858-1859" in which Robert Nace, while not listed, was mentioned:


WYNKOOP, Edward W., came with the Lecompton Party 1858, and a street in Denver still bears his name. He was a member of the Denver City Town Company, and lived here, but was also a resident of Arapahoe Village in this year, and later. In the diary of Jackson, published by Hall, he is said to be one of the proprietors of that place. In 1859 he was a friend of Bliss, and in the noted duel between that pioneer and Dr. J. S. Stone, on Mar 5, Wynkoop was his Second. (See under these names, also see files RMN of date.)
The following record from Arapahoe County Land Records, Liber D, p. 275, old, gives a little information: Edward W. Wynkoop, partner of Robert M. Nace of Lecompton, Kansas Territory, grantors, Sep 5, 1859, to Jerome Kunkle of Rising Sun, Jefferson County, Kansas, consideration $400” (here follows description of lands or lots), “all their goods and chattels, mortgaged,” the grantors acknowledging paper in Dauphin County, Kansas. This was recorded in Denver Feb 15, 1860: Mr. Wynkoop did not withdraw from the community at this time, for there is a mention in the Colorado Republican and Rocky Mountain Herald, Aug 24, 1861 as follows: Married, in this City, Wednesday, Aug 21, 1861, at Mr. Wakeley’s on Larimer Street, by Rev. Mr. Kehler, Lieut. Edward W. Wynkoop and Miss Louisa M. Brown, both of Denver. Later it is stated in the paper of Apr 15, 1882 (or near that date) that “Ned Wynkoop, a pioneer of 1858, is visiting friends in Denver, and is much surprized at the City’s growth.” This was quoted in the reminiscent column of the Rocky Mountain Herald, Apr 17, 1926.